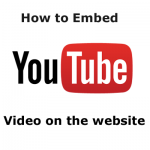 If you want to add videos on your website then the best solution is upload your video into YouTube(it will keep you away from expensive server cost and media buffereing issue) and then embed into your webpage. Video embeding on the website is not too hard, it can done by anyone who
Read More 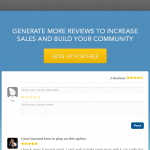 Yotpo is a plug and play social reviews solution for e-commerce websites. Yotpo was founded in March 2011, with the clear vision of changing how users make shopping decisions online. Yotpo is focused on providing the best social review experience for every website in the world. With Yotpo shoppers can read and
Read More

The Internet is always brimming with opportunities and information. You can always discover this in websites, blogs, and forums. In few clicks, you can gain the information that you need—just imagine the way people search stuff in Wikipedia. Another important thing in the Internet is interaction; without connectivity, websites will never grow
Read More

ScreenCamera, The software that transforms the PC desktop into a webcam for FREE. PCWinSoft bringing you excellent news: The company is giving away free copies of ScreenCamera, the virtual camera desktop and webcam recorder software solution. ScreenCamera is one of the coolest gadgets out there. You are used to communicate in video
Read More

Mozilla is making it official announcement that the Facebook Messenger experiment is live for Firefox Beta users. The app had been available over the weekend and Firefox Beta and Firefox Aurora users could have started using it already, but Mozilla only now announced it. According to Mozilla announcement “For the last few
Read More

Wikipedia representatives warn users that If you’re seeing ads on Wikipedia, your computer is probably infected with malware. “We never run ads on Wikipedia. Wikipedia is funded by more than a million donors, who give an average donation of less than 30 dollars. We run fundraising appeals, usually at the end of
Read More

Twitter made its ad platform for small businesses, via a self-serve program. Now, the first stage of that program is live as businesses, with American Express cards, can now sign up and start promoting their tweets and their accounts. Only a few businesses will be part of the program at first and
Read More

Twitter is going to launch of a brand new version of the site. It’s been available for a few weeks now, but not all users have it enabled yet. And new design is coming up with new features. Embedded tweets are part of the mix. While it’s been possible to embed tweets
Read More

Facebook pages are becoming more popular with brands, organisations and celebrities who want to boost their social exposure on the web. Facebook pages have become an important tool for expanding the reach of websites and blogs. The Like Box is a social plugin that enables Facebook Page owners to attract and gain
Read More