YSlow, Yahoo’s website optimization tool, is now available as a Chrome extension as well. YSlow has been available for Firefox users for a few years. Porting it to Chrome enables more webmasters to access the tool from the browser of their choice.

Ever since YSlow for Firefox was first released, it has helped millions of developers analyze web pages and suggested ways for them to improve their websites’ performance. YSlow ranks in the Top 25 for Best of 2 Billion Firefox Add-ons downloaded so far. We are very proud of where YSlow stands today and we continue to work hard to take it to the next level.

Here are some of the feature highlights:
– You’ll feel at home here. We kept the user experience consistent with YSlow for Firefox.
– Added the ability to detect post onload components, including for pages that prevent itself from being embedded and/or iframed. (experimental)
– Support for 3 main rulesets: Default YSlow V2, Classic V1, and Small Site or Blog as well as the ability to create new ones based on these 3.
– Offenders in CDN rule are now listed as domains only.
– Runs multiple YSlow instances (new windows). This feature is excellent for comparing YSlow results for different pages side-by-side as shown below. 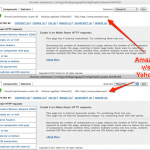