A security researchers from Kaspersky lab found a keygen for Kaspersky product which bundeled with trojan and steal information from users system. This keygen was recently spotted on file sharing websites and promises to generate serial keys for Kaspersky Anti-Virus 2010, Kaspersky Internet Security 2010 and Kaspersky Simple Scan 2010. This Trojan
Read More 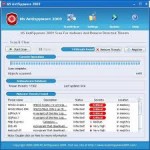 A fake anti virus program may first appear as a legitimate looking pop-up window that tells the user that they have a dangerous virus. They are then prompted to click to buy anti virus protection to sort out their system. There is, however, no virus at all but the advert contains a
Read More