Stack Overflow got 10M uniques hits, boldly goes where no Q&A site has gone before. It seems as though Q&A network Stack Overflow has put the $6 million in funding it received back in May to good use, crossing the 10 million unique monthly visit mark as of yesterday. While Q&A sites like Quora bank on the winning model being one big monolithic site, Stack Overflow is showing success by carefully separating the Q&A game into different communities, launching 34 different sites on topics as diverse as Bicycling, Cooking and IT Security.

The company had only three fulltime developers before its first round of funding, which included rockstar angel investors like Ron Conway, Chris Dixon, Naval Ravikant and Caterina Fake. Since then founder Joel Spolsky has hired 24 new employees including Stack Overflow power user Marc Gravell. 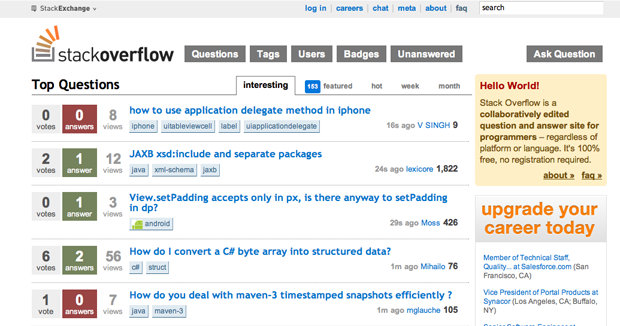 Stack Overflow traffic has soared, going from 6 million to ten million uniques in six months (it took two years to get to the first 6 million). Says Spolsky, “Almost every programmer in the world knows Stack Overflow and visits regularly, usually because we have the answer to a problem they’ve typed into Google–and the new Stack Exchange sites are starting to spread rapidly beyond the initial audience of programmers.” In my experience, things that have massive traction with coders often pick up mainstream and viral tread, as programmers spend the most time online.

Case in point: The new Stack Overflow vertical sites have only been up for a couple months but are already showing 33% monthly growth according to internal metrics. Aside from traffic, success is based on a variety of criteria, the most important of which is the percentage of site questions that have at least one up-voted answer. Spolsky says that all of the new sites have 90-100% answer up-vote rates.

In terms of future plans, Spolsky is focusing on Stack Exchange and encouraging the growth of even more new verticals where experts can come together, “Ultimately we think there will be hundreds or thousands of these sites providing extremely high quality answers to detailed questions, so the most important thing we’re working on is really cultivating niche communities.”