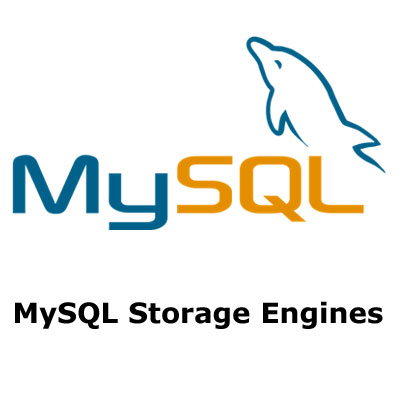 Storage engines are MySQL components that handle the SQL operations for different table types. InnoDB is the default and most general-purpose storage engine, and Oracle recommends using it for tables except for specialized use cases. (The CREATE TABLE statement in MySQL 5.7 creates InnoDB tables by default.)

MyISAM:
These tables have a small footprint. Table-level locking limits the performance in read/write workloads, so it is often used in read-only or read-mostly workloads in Web and data warehousing configurations.

Memory:
Stores all data in RAM, for fast access in environments that require quick lookups of non-critical data. This engine was formerly known as the HEAP engine. Its use cases are decreasing; InnoDB with its buffer pool memory area provides a general-purpose and durable way to keep most or all data in memory, and NDBCLUSTER provides fast key-value lookups for huge distributed data sets.

Blackhole:
The Blackhole storage engine accepts but does not store data, similar to the Unix /dev/null device. Queries always return an empty set. These tables can be used in replication configurations where DML statements are sent to slave servers, but the master server does not keep its own copy of the data.

NDB (also known as NDBCLUSTER):
This clustered database engine is particularly suited for applications that require the highest possible degree of uptime and availability.

Merge:
Enables a MySQL DBA or developer to logically group a series of identical MyISAM tables and reference them as one object. Good for VLDB environments such as data warehousing.

Federated:
Offers the ability to link separate MySQL servers to create one logical database from many physical servers. Very good for distributed or data mart environments.

Example:
This engine serves as an example in the MySQL source code that illustrates how to begin writing new storage engines. It is primarily of interest to developers. The storage engine is a “stub” that does nothing. You can create tables with this engine, but no data can be stored in them or retrieved from them.
You are not restricted to using the same storage engine for an entire server or schema. You can specify the storage engine for any table. For example, an application might use mostly InnoDB tables, with one CSV table for exporting data to a spreadsheet and a few MEMORY tables for temporary workspaces.

To determine which storage engines your server supports, we use the SHOW ENGINES statement. The value in the Support column indicates whether an engine can be used. A value of YES, NO, or DEFAULT indicates that an engine is available, not available, or available and currently set as the default storage engine. 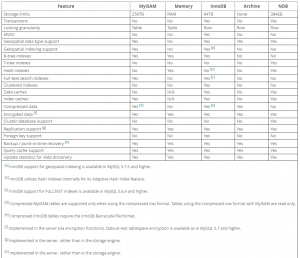 You can find more articles on MySQL