While the rumors of a possible Google buyout continue to pour in, Groupon is making several big moves of its own. It’s introducing the biggest update to the site and the business model since launch and it’s also acquiring three group-buy startups in Asia.

With Groupon Stores, businesses can now create and launch their own deals whenever they want. Think of it as the online equivalent of a merchant’s physical storefront. Merchants can now:

* Setup a permanent (and free!) e-commerce presence on Groupon for promoting their business.
* Create their own offers to run deals whenever they want.
* Submit deals to be promoted to Groupon subscribers through email and the Deal Feed (explained below).
* Get customers to follow their Groupon Store, and stay in touch by sending messages through the daily email and deal feed. 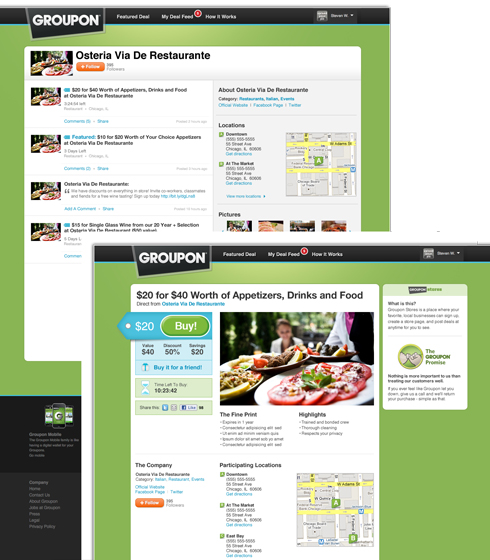 Each day groupon will select the best deals from Groupon Stores and match them to customers using our personalization technology. Follow any Store so you’ll never miss a deal from your favorite merchant. 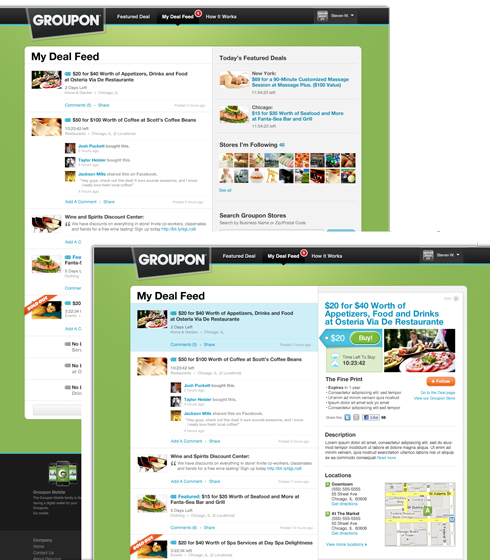 Groupon will be adding tons to the Deal Feed over time, beginning with making it more social: you will be able to connect your feed to Facebook and receive updates on what your friends are doing, such as when your friends buy deals, follow a new merchant or comment on an offer. This will be another fun way to find great offers – or just keep on top of what your friends are up to.

Why Groupon built it

Groupon originally designed to account for the constraints of being a small company. Since we didn’t have any merchant relationships, we limited ourselves to one deal per day. Today things are different – our biggest problem is that demand is so high, merchants often wait months to be featured. And while we once only had a few thousand customers per city, now we have hundreds of thousands (Chicago just added its millionth subscriber!) – making it increasingly difficult to find one deal that satisfies everyone.

Personalization, Stores, and the Deal Feed are our attempt to re-imagine things. How would we have built Groupon if we started with hundreds of thousands of relationships with the best merchants in the world, millions of customers, and a world-wide operation with thousands of people helping merchants create deals? With these new features, we can feature more merchants and deliver a more relevant experience for customers, while maintaining the curated, serendipitous and simple experience that’s at the core of Groupon.