New York, N.Y., Dec. 29, 2010 – Experian® Hitwise®, a part of Experian Marketing Services, has analyzed the top 1000 search terms for 20101 and Facebook was the top-searched term overall. This is the second year that the social networking website has been the top search term overall, accounting for 2.11 percent of all searches.1 Four variations of the term “facebook” were among the top 10 terms and accounted for 3.48 percent of searches overall. 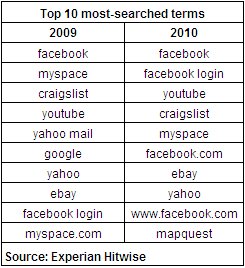 The term “facebook login” moved up from the 9th spot in 2009 to the second spot in 2010. YouTube was the third most-searched term in 2010, followed by craigslist, myspace and facebook.com. Analysis of the search terms revealed that social networking-related terms dominated the results, accounting for 4.18 percent of the top 50 searches.